Criminal Minds introduces the potential new spinoff tonight, followed by a new episode of CSI: Cyber. You can find sneak peeks, interviews, tweets and photos after the jump!

This next clip features Penelope Garcia (Kirsten Vangsness) and another member of Garrett’s team, Russ “Monty” Montgomery (Tyler James Williams). (You can also find it on CBS.com, CBS Press Express and SpoilerTV.)

TV Fanatic offered this sneak peek, in which Garcia and Monty speak to the victims’ family:

Next, check out this scene from TV Guide, which features Garrett, Lambert, Simmons, Hotch, Rossi, Morgan and JJ:

Messer spoke to TV Guide about the spinoff, including this quote:

[Executive producer] Mark Gordon had been wanting to do another spin-off and I felt like we just needed to wait until we found the right idea. Certainly going the international route felt like it was the right thing to do, the right time to do it. We are 10 seasons in. It answers that spin-off dilemma, which is: How is this show the same but different from the mothership? And I think we were able to solve that nicely by saying that [the two shows are] the same in that they’re profilers solving crimes via behavior, but it’s different because they’re doing it outside of our country when Americans are in trouble.

Here’s another interview with Messer, this time from TV Fanatic. Check out this excerpt:

TVF: Does the group kind of have that family feel that we’re used to in the mothership?

What we’ve established is the BAU is so busy [and] they’re traveling all the time, they don’t really have a chance to stop and have social visits with other people who are also traveling the world solving crimes. So, the idea is that they’re all familiar with one another and have a very supportive coworker type vibe about them, and the new team that’s introduced in this episode is small.

It’s Gary Sinise, Anna Gunn, Daniel Henney, and Tyler Williams, so we’re only meeting four of the characters. Presumably at a series level, we would be adding another character, but that’s the quality problem to have…so the goal will be to end up falling in love with these characters and their relationship to one another, and their family unit the way people did with Criminal Minds. It’s lightning in a bottle. It won’t be the same obviously because it’s ten years of a show that people have grown to love and love the characters, but I think we’ll be able to get there with the new cast as well.

The two FBI teams work together to solve the case in tonight’s episode, and there is no rivalry between them. “They all are very aware of one another. There’s no, ‘Who’s that?’ ‘Can we really work together?’ or ‘Why are we doing this with you?'” Messer told TV Guide. “They’re all the best at their jobs. We go all over the country. These guys go all over the world. There’s a familiarity between all of them, but they never get a chance to work together until now.”

Messer also did an interview with TV Line about “Beyond Borders”, and here’s an excerpt about Sinise’s character:

TVLINE | To the extent that you are familiar with his CSI: New York character, how would you juxtapose the two?

I don’t know a lot about Mac Taylor. I watched it a little bit and I did some research because I didn’t want them to be the same. So, right off the bat I know Mac lost his wife in the tragedy of 9/11, and as a result he had a really hard time sort of loving again, and I didn’t want to repeat that in any way. I said to Gary, “Look, the reality of the FBI is, I think, the stats are worse than the national average in terms of divorce. We could either have you represent that portion of people who don’t survive a career in the FBI and a marriage, or we can go the opposite, where you’re representing the ones that do.” There’s also something really “lovely” about showing that marriages do last through difficult times, and that’s perhaps a generational thing. I know my grandparents and my parents were married until death did they part, and Gary also grew up with that idea that you don’t throw it away when it stops working, you fix it. So he’s got kids, and one of the oldest just got into the academy and wants to follow in his dad’s footsteps.

Henney told The Korea Times last month that his character, Matt Simmons, is an All-American family man. “I am super excited because we have never, ever seen seen this character from an Asian actor before,” he said. “Under any other circumstance, I can’t believe they would come to an Asian American actor. Props to CBS for giving it a shot with me. We’re going to do some great things with it.”

Finally, check out these tweets and photos:

@danielhenney Came back to do an added scene with us today. pic.twitter.com/GsVIcMaXVG

Having some fun on set with Thomas. Tune in #criminalminds on Wednesday night pic.twitter.com/b65s6R48bJ

A little goofing around with @Esai_Morales on set of Criminal Minds. Episode airs tomorrow night. pic.twitter.com/jENkRRnqki 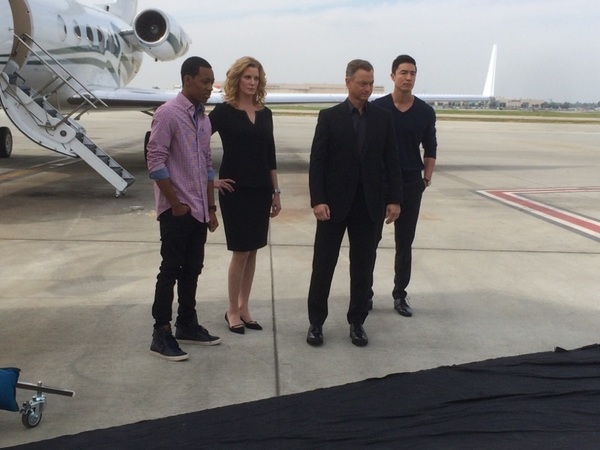 Finally, take a look at these tweets and photos, followed by two videos:

New episode of @CSICyber tomorrow night! From the look of our faces, we're taking this bomber SERIOUS #CSICyber pic.twitter.com/oTTxNulUHb

Hey guys, don't forget to check out #CSICyber tomorrow night on @CBS at 10/9c directed by yours truly. pic.twitter.com/oklntUhlkp

We were dark last week, but we're back tomorrow w/ a new episode… #CSICyber 10/9c on @CBS pic.twitter.com/47JZGVQOzF

We've encountered some serious criminals thus far, but this bomber in tomorrow nights episode is a Lunatic and might be the craziest criminal yet! We are BACK!! New episode of @csicyber tomorrow night on CBS 10pm est 9c

we are BACK with an all new episode tonight at 10 pm !!! https://t.co/EkUKGsr1ry

RT 10pm est on CBS! Its all about #CSICyber all my CSI FANS see you tonight! Don't forget to tweet me all show long pic.twitter.com/76HWhaPE94

Lots going on today. Shooting new eps for #TheNightShift and tonight my ep for #CSICyber airs on @CBS at 10/9c. pic.twitter.com/fHK0zn3lie

Pumped to be back tonight w/ @CSICyber and these 2 up&comers! Hollywood take notice of these guys! #CSICyber 10/9c !

We are BACK!!! A bomber gets the whole team involved and things get heated. Don't miss an all new… https://t.co/ccWI47oOgX

And here are the videos:

In tonight's episode you will see my character Nelson meet the former black hat hacker tobin who worked at the agency for Avery Ryan before I got there. He's the reason why James's character doesn't trust me because of him now it's time for us to meet face-to-face for the first time. Even though he's locked away in a secure prison he still can be dangerous tonight at 10 PM watch it all unfold on CBS. Should i give him my hacker handle? #csicyber #teamnelson